From Wikipedia, the free encyclopedia

Johnson City is a city in Washington, Carter, and Sullivan counties in the U.S. state of Tennessee, with most of the city being in Washington County. As of the 2010 census, the population of Johnson City was 63,152,[6] and by 2015 the estimated population was 66,027, making it the ninth-largest city in the state.[1]

Johnson City is ranked the #14 "Best Small Place for Business and Careers" in the USA by Forbes,[7] and #5 in Kiplinger's list of "The 10 Least-Expensive Cities For Living in the U.S.A." stating the low cost of living is attributed to affordable homes and below-average utility, transportation and health-care costs.[8]

In the 1780s, Colonel John Tipton (1730–1813) established a farm (now the Tipton-Haynes State Historic Site) just outside what is now Johnson City. During the State of Franklin movement, Tipton was a leader of the loyalist faction, residents of the region who wanted to remain part of North Carolina rather than form a separate state. In February 1788, an armed engagement took place at Tipton's farm between Tipton and his men and the forces led by John Sevier, the leader of the Franklin faction.[13]

Founded in 1856 by Henry Johnson as a railroad station called "Johnson's Depot", Johnson City became a major rail hub for the Southeast, as three railway lines crossed in the downtown area.[14] In the late 19th and early 20th centuries, Johnson City served as headquarters for the narrow gauge East Tennessee and Western North Carolina Railroad (the ET&WNC, nicknamed "Tweetsie") and the standard gauge Clinchfield Railroad. Both rail systems featured excursion trips through scenic portions of the Blue Ridge Mountains and were engineering marvels of railway construction. The Southern Railway (now Norfolk Southern) also passes through the city.

During the American Civil War, before it was formally incorporated in 1869, the name of the town was briefly changed to "Haynesville" in honor of Confederate Senator Landon Carter Haynes.[15] Henry Johnson's name was quickly restored following the war, with Johnson elected as the city's first mayor on January 3, 1870. The town grew rapidly from 1870 until 1890 as railroad and mining interests flourished. However, the national depression of 1893, which caused many railway failures (including the Charleston, Cincinnati and Chicago Railroad or "3-Cs", a predecessor of the Clinchfield) and a resulting financial panic, halted Johnson City's boom town momentum.[16]

In 1901, the Mountain Branch of the National Home for Disabled Volunteer Soldiers (now the U.S. Veterans Affairs Medical Center and National Cemetery), Mountain Home, Tennessee[17][18] was created by an act of Congress introduced by Walter P. Brownlow. Construction on this 450-acre (1.8 km2) campus, designed to serve disabled Civil War veterans, was completed in 1903 at a cost of $3 million. Prior to completion of the facility, the assessed value of the entire town was listed at $750,000. The East Tennessee State Normal School was authorized in 1911 and the new college campus located directly across from the National Soldiers Home. Johnson City began rapidly growing and became the fifth-largest city in Tennessee by 1930.[19]

Together with neighboring Bristol, Johnson City was noted as a hotbed for old-time music; it hosted noteworthy Columbia Records recording sessions in 1928 known as the Johnson City Sessions. Native son "Fiddlin' Charlie" Bowman became a national recording star via these sessions.[20] The Fountain Square area in downtown featured a host of local and traveling street entertainers including Blind Lemon Jefferson.

During the 1920s and the Prohibition era, Johnson City's ties to the bootlegging activity of the Appalachian Mountains earned the city the nickname of "Little Chicago".[21] Stories persist that the town was one of several distribution centers for Chicago gang boss Al Capone during Prohibition. Capone had a well-organized distribution network within the southern United States for alcohol smuggling; it shipped his products from the mountain distillers to northern cities. Capone was, according to local lore, a part-time resident of Montrose Court, a luxury apartment complex now listed on the National Register of Historic Places.

The city is featured in a song and video by Travis Tritt called "Modern Day Bonnie and Clyde", although the line "rollin' north on 95" is fictionalized, as Interstate 81 and Interstate 26 intersect near Johnson City. The city is mentioned in a song by Old Crow Medicine Show called "Wagon Wheel", in the lyric "Walkin' to the south out of Roanoke, I caught a trucker out of Philly had a nice long toke. But he's heading west from the Cumberland Gap, to Johnson City, Tennessee."[22] Johnson City is approximately 100 miles east of Cumberland Gap.

For many years, the city had a municipal "privilege tax" on carnival shows, in an attempt to dissuade traveling circuses and other transient entertainment businesses from doing business in town.[23] The use of drums by merchants to draw attention to their goods is prohibited. Title Six, Section 106 of the city's municipal code, the so-called "Barney Fife" ordinance, empowers the city's police force to draft into involuntary service as many of the town's citizens as necessary to aid police in making arrests and in preventing or quelling any riot, unlawful assembly or breach of peace.[24]

Johnson City is run by a five-person commission. The commissioners are as follows:[25]

The city is served by the Johnson City Police Department.

Johnson City is located in northeastern Washington County at 36°20′N 82°22′W (36.3354, -82.3728),[27] with smaller parts extending north into Sullivan County and east into Carter County. Johnson City shares a contiguous southeastern border with Elizabethton. Johnson City also shares a small contiguous border with Kingsport to the far north along I-26 and a slightly longer one with Bluff City to the northeast along US 11E.

The steep mountains, rolling hills and valleys surrounding the region are part of the Appalachian Ridge-and-Valley Province, and Johnson City is just west of the Blue Ridge Mountains. Roan Mountain, with an elevation of over 6,000 feet (1,800 m), is approximately 20 miles (32 km) to the southeast of the city. Buffalo Mountain, a ridge over 2,700 feet (820 m) high, is the location of a city park on the south side of town. The Watauga River arm of Boone Lake, a TVA reservoir, is partly within the city limits. 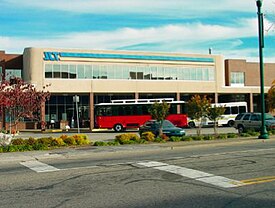 Johnson City Transit (JCT) operates a system of buses inside the city limits, including a route every fifteen minutes along Roan Street. Main transit routes operate 6:15 a.m. to 6:15 p.m. Monday through Friday, and 8:15 a.m. to 5:15 p.m. on Saturdays. JCT also has an evening route that operates weeknights between 6:15 p.m. and 11:00 p.m.[32] The Johnson City Transit Center, located downtown on West Market Street, also serves as the transfer point for Greyhound lines running through the city. JCT operates the BucShot, a system serving the greater ETSU campus.

Milligan College is located just outside the city limits in Carter County, and has about 1,200 students in undergraduate and graduate programs.

Northeast State Community College is renovating a building in downtown Johnson City for use as a new satellite teaching site.[35]

Tusculum College and ITT Technical Institute have centers on the north side of Johnson City in the Boones Creek area. 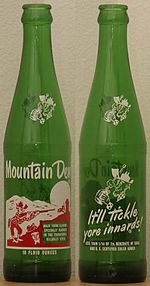 Mountain Dew traces its origins to the city.

Johnson City is ranked #35 "Best Small Place for Business and Careers" in the USA.[7] Due to its climate, high quality health care and affordable housing, it is ranked #8 "Best Place for African Americans to Retire" by Black Enterprise magazine.[36] Kiplinger ranked Johnson City #5 in "The 10 Least-Expensive Cities For Living in the U.S.A.", stating the low cost of living is attributed to affordable homes and below-average utility, transportation and health-care costs.[8]

The popular citrus soda, Mountain Dew, traces its origins to Johnson City. In July 2012, PepsiCo announced that a new, malt-flavored version of the drink will be named Mountain Dew Johnson City Gold, in honor of the city. The drink will be test marketed in the Chicago metropolitan area, Denver, and Charlotte, beginning in late August.[37]

Johnson City serves as a regional medical center for northeast Tennessee and southwest Virginia, along with parts of western North Carolina and southeastern Kentucky. Although there are two major hospital systems in the Tri-Cities, only one – Mountain States Health Alliance – has a presence in Johnson City.

The Johnson City Medical Center, designated a Level 1 Trauma Center[39] by the State of Tennessee, is MSHA's flagship institution. Also affiliated with the center are the Niswonger Children's Hospital, a domestic affiliate of St. Jude Children's Research Hospital[40] and Woodridge Hospital, a mental health and chemical dependency facility.

Franklin Woods Community Hospital is a LEED-certified facility located in North Johnson City.[41] The "green" hospital (opened July 12, 2010) encloses approximately 240,000 square feet (22,000 m2) on a 25-acre (100,000 m2) lot adjacent to The Wellness Center inside MedTech Park. The hospital has 80 licensed beds and a 22-room Emergency Department. Of the licensed beds, 20 are dedicated to Women’s and Children’s Services. 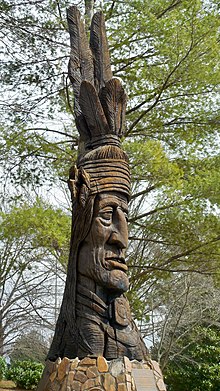 The Hands On! Museum, located in downtown Johnson City, houses an interactive gallery of exhibits and is a local favorite for school field trips.

The corporate headquarters of General Shale Brick, between North Johnson City and Boones Creek, is home to a museum that showcases a collection of historically significant bricks including a 10,000-year-old specimen from the ancient city of Jericho.[42]

The Tipton-Haynes State Historic Site is located in the south of the city. Along with a museum and education center, there are eleven other buildings on-site dedicated to preserving and sharing traditional Appalachian farming and craft methods.[43] The site hosts the Bluegrass and Sorghum Making Festival every year, as well as other events during holidays and in the summer.

The Little Chicago Blues Festival is an annual celebration of the legendary Prohibition-era speakeasies and railroad glory days of Johnson City. The festival is housed in the historic Down Home, a regional hub for Americana and bluegrass music performance. The event is a fundraiser for WETS-FM, the local NPR affiliate.

The Umoja Unity Festival is held annually in downtown Johnson City. Initiated in 1978, Umoja, a Swahili word meaning "unity", is a festival that spotlights the diverse societies of Johnson City, with an emphasis on African-American and Latino cultures. The downtown celebration includes musical performance as well as food and craft vendors.[44]

Each month the downtown shopping district of Johnson City is home to "First Friday", a growing art and music festival. First Friday began as an event at Nelson Fine Art for introducing new artists to the public and has grown to include much of downtown. It features restaurant specials, gallery receptions and shopping specials.

As a regional hub for a four-state area, Johnson City is home to a large variety of retail business, from well-known national chains to local boutiques and galleries.

The Mall at Johnson City is the city's only enclosed shopping mall. California-based Forever 21 opened a XXI Forever flagship store in the mall's upper level, and Express opened in late 2010. The nearby Target Center houses Target, T.J.Maxx, Books-A-Million, and Pier One.

Much of the new retail development is located in North Johnson City, along State of Franklin Road. Johnson City Crossings is the largest of these developments. On the other side of the highway are retailers Kohl's, Lowe's, Sam's Club and Barnes & Noble.

WJHL.com is the online portal of the local television station and rebroadcasts many show segments for free online.

SaveRightNow, Tri-Cities Daily Deals was the first daily deal site established in East Tennessee and has over 50,000 locals subscribers.

WJHL-TV is a CBS affiliate licensed in Johnson City. The station's DT2 subchannel serves as an affiliate of ABC. The city is part of the Tri-Cities Designated Market Area, which also comprises WCYB-TV in Bristol, VA (NBC; CW on DT2), WEMT in Greeneville (Fox), WETP-TV in Sneedville (PBS) and WKPT-TV in Kingsport (MyNetworkTV).

Johnson City is part of the Johnson City-Kingsport, Bristol Arbitron radio market. WETS-FM 89.5 FM, located on the campus of East Tennessee State University, is the region's NPR affiliate and the Tri-Cities' first HD radio service. WJCW 910 AM and WQUT 101.5 FM are Cumulus Media stations which are also licensed in Johnson City. The EDGE is a non-broadcasting student-run radio station at East Tennessee State University.[46]